Disclaimer: Still not a lawyer

Earlier this week, the FTC released an updated version of its .Com Disclosures guidance for digital advertising, originally published in 2000. While there is some new information here for bloggers and social media influencers who produce sponsored content for advertisers (and I will get into that below), the document’s principal goal is to provide guidance for proper disclosure of advertising claims in digital, and especially mobile, advertising in light of new technologies. Much like the changes in the endorsement guides in 2009 that were prompted, in part, by the rise of social media and blogs.

Simply put,  the FTC is making sure that, as ad delivery technology changes, claims are properly disclosed and not “lost” in the translation from web to mobile displays.

From the social media perspective, most of the information related to accuracy of claims and disclosure of relationships is the same as is covered in the 2009 Guidance on Endorsements and Testimonials. In other words, there isn’t all that much new here. You still  need to disclose material relationships with brands, in a clear and conspicuous manner proximate to your endorsement, and both you and the sponsor have an obligation to be accurate in your claims about a product. Read my detailed analysis of the examples in the 2009 guide if you want more detail.

Is there anything new here for bloggers? Why yes. It’s not a lot but it’s very nice. The .Com Disclosures document includes new examples that will make it easier for people creating sponsored content to comply with the FTC Guidelines, as well as clarity on the proper ways to disclose additional required information about product claims.

Where and how to disclose. As far back as 2009, the FTC was already publicly recommending that disclosures not be buried at the bottom of a post or on a separate page (Once More With Feeling: FTC guidelines, bloggers and companies). Now, however, we have an explicit example. 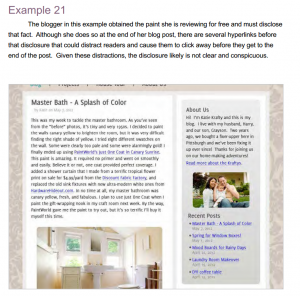 Takeaway: Do not put your disclosure solely at the bottom of your post.

Recommendation: Include a brief disclosure at the top and if necessary, provide additional details at the bottom.

However, the exact words you use to disclose? Still up to you.

How to disclose in short-form environments like Twitter. The FTC has always said that the disclosure must be proximate to the endorsement. While common sense would indicate that this means in every sponsored Tweet or Facebook post in which an endorsement appears (and that’s certainly how we handle it at BlogHer), that’s not what was happening on Twitter. Not by a long shot. So, the .Com disclosures have a series of terrific examples of the wrong and right ways to disclose on Twitter. Key points:

Recommendation for a best practice:

The .Com Disclosures also included one other tidbit that was clearly aimed at advertising disclosure of claims, but is valuable for bloggers as well. When an advertising  claim merits a longer disclosure than is practical for the format, a hyperlink to  additional information is acceptable, provided that anything material, or “triggering” is included in the original advertisement and  the link is clear and conspicuous.  In other words, you cannot bury CRITICAL disclosures in hyperlinked pages, but you can provide additional details.

“Hyperlinks allow additional information to be placed on a webpage entirely separate from the relevant claim. Hyperlinks can provide a useful means to access disclosures that are not integral to the triggering claim, provided certain conditions (discussed below) are met. Hyperlinked disclosures may be particularly useful if the disclosure is lengthy or if it needs to be repeated (because of multiple triggering claims, for example).
However, in many situations, hyperlinks are not necessary to convey disclosures. If a disclosure consists of a word or phrase that may be easily incorporated into the text, along with the claim, this placement increases the likelihood that consumers will see the disclosure and relate it to the relevant claim.
Disclosures that are an integral part of a claim or inseparable from it should not be communicated through a hyperlink. Instead, they should be placed on the same page and immediately next to the claim, and be sufficiently prominent so that the claim and the disclosure are read at the same time, without referring the consumer somewhere else to obtain this important information.” — from the .Com Disclosures Guide. Emphasis mine.

This could be extremely useful for sponsored programs for products and services in highly regulated industries. The sponsored post would still have to meet all the requirements for accuracy, with any critical product claims disclosed in the post, but bloggers wouldn’t have to include all the “fine print” in their posts.

So, some nice clarity for some critical areas. But nothing to get too worried about.

Unless you are creating deceptive mobile ads for weight loss products or jewelry!

FTC FAQ on the Endorsement Guides (2010)