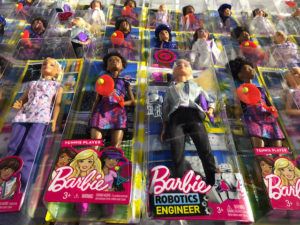 This week we opened the show with a brief rundown of the BlogHer Creators Summit, and then moved to the main event, our discussion of fraud, the responsibility of the social platforms to remove hate speech and meme accounts.

It was my 14th BlogHer (not counting food, business etc., the offshoot shows of which I missed a few) but just the “main” summer event. The format was a bit different than past, with most of the action on the main stage throughout the day. Some of the highlights were: Christy Turlington Burns and Kirsten Gillebrand discussing maternal health and the need to VOTE, P&G exec Shelly McNamara on her experiences as an out gay executive in corporate America, Mattel’s new career Barbies and meeting Voice of the Year honoree Dr. Alaa Murabit.

Fraud is still very much in the digital media news. Instagram fraud had the headlines a few weeks ago, and likely will again (!) but last week saw an expose in the New York Times about YouTube fraud and concerns from advertisers about GDPR fraud in the form of false consent strings.

Truth number 1 this week is that if it seems too good to be true, it probably isn’t. True.

Impressions, views, page views are all important starting points to understand DELIVERY but we need to focus on the engaged audience, and our results in that context. Looking at engagements instead of reach starts to counteract the fraudsters. Not completely, but a start. Artificial Intelligence cuts both ways. It is easier for the bad guys to create fake accounts and fake comments, but it is also getting easier to spot them. When we remove the suspicious activity from the results, we can look at the legit activity and engagements, for a better answer.

At long last, this month the platforms began (finally) to take action against hate monger Alex Jones. Apple removed it from podcasts, Spotify, Facebook and YouTube took action, removing content and deactivating accounts but there is still a great deal of inconsistency within the platforms. And Twitter did nothing.

Truth #2 is that while we should be grateful for less Alex Jones on the Internet, we need to hold the platforms accountable to do more.

Any action by the social platforms to reduce the volume of hate speech and lies by bigots like Alex Jones is a GOOD thing, no matter how excessively long it took them to get there or how incomplete the response. There is LESS Alex Jones on the Internet today and for that we should be grateful. But…. it did take far too long and we must hold them accountable. They do not get a pass on resolving the inconsistencies among their different services.

In the SNCR fake news survey last fall, marketers said that platforms had a responsibility to resolve the problem of unsafe, untrue content. Part of the response must include clear consistent policies across all services and enforcement thereof.

The myth or lie —
Bots and Meme accounts can replace authentic influencer content, and since they are much easier to control, are a good alternative to customer activation. No, no, a thousand times no.

If you want to make a SOCIAL BOT or use chat BOTs in your strategy, that is a legitimate choice, and can be very successful, but be honest about it. If you are mimicking actual human SOCIAL engagement, the consumer deserves to know she or he is chatting with a bot. It won’t matter to many, especially Gen Z that is already so accustomed to engaging with digital avatars. But they should be informed.

As far as memes go, by all means use them. They are a crucial tool for earned social shares. But don’t think  meme accounts can replace the voice of your customer as an influencer, not just a re-share. Use them alongside influencers but not instead.