“Eyeballs” don’t fall in love with your program. People do.

This week, an interesting piece on Digiday, The ‘demonetized’: YouTube’s brand-safety crackdown has collateral damage, reported, among other things, that the tools used by YouTube to identify and demonetize unsafe content were often inconsistently or inaccurately applied, causing sharp declines in revenues for many creators, especially those with smaller channels focused on news, politics, social issues and gaming.

Programmatic media buying, which matches audience to impressions, has, if not created, certainly exacerbated the problem of unsafe, unsavory content hosting ads for brands that otherwise would NEVER advertise against that content. On the flip side, programmatic, AI-powered, media blocking may have over-corrected the problem, blacklisting sites that brands otherwise might have wanted to advertise on. Satire. Social commentary. Criticism.

At the same time, I think we are on the brink of a shift in how we experience video content, that brings us back to the spirit of the early days of television. When programming wasn’t just content and audience = ratings point or view = success.

It was a shared experience.

After the first heady rush to digital video a few years ago, publishers realized that building good content wasn’t enough. “If you build it, they will come” is still only true in movies about baseball. We had to draw the right audience to the content. “Eyeballs.” Something that proved difficult for digital-only properties, less troublesome perhaps for owners of broadcast franchises. Over the past year, concurrent with the shift to programmatic media and the rise of OTT, audience became the mantra of the moment. Perhaps even more valuable in some respects than the quality of the content.

But this won’t last. It’s not sustainable and the audiences are not necessarily loyal. If you have to buy every viewer for a fraction less than you sold it for, the pyramid will eventually collapse.

“Eyeballs” don’t fall in love with your program. People do.

What we need is to develop compelling content, reach the right audience and then develop loyal communities of viewers that want to share the experience with each other, not just watch and maybe click through to a sponsor now and then. It comes down, again, to fans.

As I commented last week, the finale of Game of Thrones demonstrates that people will watch in real time, if the content is strong enough, and the shared experience valuable enough. Not only will they watch, but also they will become advocates for the programming. With the right community marketing strategy, their advocacy can extend to the sponsors of the programming, and program advocates become brand evangelists. And, bonus, they don’t actually HAVE to watch in real time for the loyal, committed advocate audience to develop. We just need to feed it well.

That is our branded content and native advertising opportunity. Not to mention the more lucrative opportunity for video creators.

It’s not as easy as media sales. It doesn’t scale as simply as impressions. But the connections forged through shared experience, shared values, are infinitely stronger for brands as well as fans. When we target our advertising to the content and the audience together, we also avoid the problem of adjacency to unsavory content.

Late last week, Salon announced that it had inked a deal with Tout to combine Salon Media’s current video distribution on Facebook Live, Twitter, and Salon.com with Tout’s targeted video programming across more than 3,500 publisher partner sites. What this really means is buried in press release gobbledy-gook but my take is that Salon wanted scaled distribution and Tout needed better, more relevant, more engaging content.

It is not enough to have amazing content or a huge audience. You need both. And IMO, to succeed longterm, you need community. 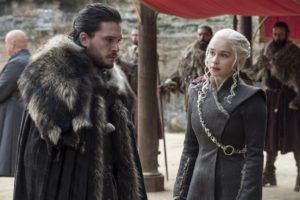 The most important lesson of Game of Thrones this year? No, not that incest is okay if you have buns of steel, although for the record, IMO the Jon/Dany incest angle is far less interesting than the power dynamics their blood relationship causes. The real lesson is what Ed Martin discusses in his piece “Game of Thrones” Transcended Technology in Season 7: people WILL engage with entertainment in real time.

His article focuses on the storytelling, which was excellent and pushed just about every emotional button the audience has, but only hints at what I think is the stronger force at work: the community.

The power of the shared experience. That is the most important lesson.

And for extra credit, note that GoT feeds its community very well. Behind the scenes videos released after the episodes that extend the experience. The steady drumbeat of press tours and convention appearances combined with the general likability of the show stars. And yes, merchandise.

It starts with the content, but the secret ingredient is the community.