Before we start this special holiday edition of good pitch/bad pitch,  a minor change of policy. While I will continue to protect the personal identities of the people who send the bad pitches, I will no longer be blacking out company and product names  when the pitch is particularly awful or the company is a multiple repeat offender.

Which is the case with both our tales today. 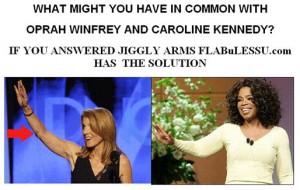 There’s so much wrong with this pitch, it is hard to know where to start. I’ll leave aside my issues with the product itself, and focus on the why the pitch sent to mombloggers last week was so awful. If you’d like a good summary of the problems with the product, which is basically a girdle for your upper arms, check out PunditMom.

Back to the pitch.

There is a special place in hell for this type of news release, that uses celebrity names to attract attention, fool search engines and imply some sort of endorsement when in fact there is no such thing. The tactic was trotted out multiple times last fall about products tangentially related to Alaska governor Sarah Palin such as her eyewear, and appears on a regular basis for baby products, tied to whichever celebrity mom is about to or has recently given birth. Angelina Jolie… JLo… Jennifer Garner… Gwen Stefani… And so on.

In the FLABuLESSU pitch, this marginal tactic is then compounded by the subject matter, which is both trivial and offensive. Two extremely powerful and successful women and they want us to identify with them because we all have flabby arms? Puleez. It’s already a shady tactic, but this crosses over into the offensive.

To make matters worse, when a friend of mine emailed the company about how offensive the pitch was, she basically got a brush-off reply that many women love the product, which has been featured on Rachael Ray and in the NY Post. Okay then. That makes all the difference. I guess.

Except not. Neither Caroline Kennedy nor Oprah Winfrey has endorsed this product, and to use their names and images in this fashion is offensive and unethical public relations practice. Which is why the FLABuLESSU pitch gets the first-ever Marketing Roadmaps SCUMBAG AWARD.

And it’s too bad really.  I personally have known women traumatized by their arm flab.  I get it. Don’t agree, but get it. Product fills an unmet market need. Could have been successful. But there are so many better ways to reach out to the target market. Hi-jacking Ms. Kennedy and Ms. Winfrey was unnecessary.

Speaking of Rachael Ray, the PR agency that represents Every Day with Rachael Ray as well as some other food properties seems determined to bury blogger Erika Jurney with recipes, even after multiple email requests to cease and a blog post last May that minced no words. This month’s missives include holiday recipes from Rachael as well as another client.

And then there’s this gem: 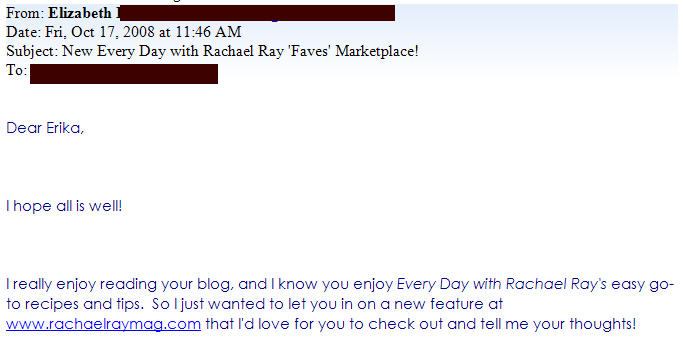 Note the date. More than a few months after Erika’s rant about the recipes. And this is only a sample of the many, many pitches Erika has received from this agency, which gets the BURNT SUGAR COOKIE AWARD for not paying attention. Elizabeth, if you were reading Erika’s blog, you’d know that she doesn’t want your recipes.

Next up in our series: why holiday-themed pitches are rarely a good idea.